As volunteers for Dream School Foundation my friend Tanvi and I were to go to Balak English School, Yeshwanthpur, an allocated centre for the Headstart Program. Upon arrival, we were greeted by the smiling faces of students who very politely guided us to the second floor where the DSF after school tuition were held. We were unaware of what to expect as we climbed the stairs of the school which brought back memories from the times we were wide-eyed 12-year-olds in a hurry to grow up. We walked into the second floor to be greeted by a class of children who were learning mathematics. Their teacher welcomed us and showed us the classroom that we would be teaching the children in.
We entered the room and began to unpack and prepare ourselves for the students, neither of us knew what to expect. Within two minutes a girl with wide eyes and a uniform cracked the door open and said, “Excuse me, Ma’am? Can we please come in?” Tanvi ushered the students into their seats and we began to introduce ourselves. The students were very warm and interacted without inhibitions as we began to converse in Kannada, we essentially wanted to introduce ourselves while also gauging the level of the students to ensure the smooth functioning of the entire module. Upon reflection after the class, what we realised was that we had possibly been reminded of something that seems to be scarce among most students today. The motivation and joy that a student should possess at the prospect of possibly learning something new.
The eagerness shown by these students who are generally from economically vulnerable backgrounds real+ly should put things in perspective for those of us who are lucky enough to have access to large private schools and universities. In daily observation, it's not rare to hear peers or ourselves complaining about the amount of work we are “burdened” with. The joy of learning something new seems to have died out in most students who have let themselves become victims of monotony. That is what this handful of children reminded me to keep alive, the passion that seems to be dwindling in most of us today, the passion to learn.
http://dsfindia.org/
Written by Joseph Kevin Abraham

Disparity of education in Bangalore

Anyone staying in Bangalore is sure to have noticed one thing as they attempt to navigate the morning traffic - an overwhelming number of students running about to get to school. There has been a rapid increase in the number of schools that have opened in the city of Bangalore thanks to the steadily growing population that has increased by 47% in the time period between 2012 to 2017. Bangalore has almost 2632 fully functional unaided private schools but these schools charge fees that start from an average yearly fee of 12,500 INR. This is an extremely high value for a city that has almost 40.5 lakh people living in slums and earning a meagre sum as most of these families are supported by daily wage workers.
These families generally have at least 2 to 3 children that they support and after the recent NITI Aayog initiatives and RTE Act (2010), education was made compulsory up till the lower secondary grade. The families from these economically vulnerable backgrounds send their children to government schools that are completely aided and require little to no fees. The students who go to these schools very rarely receive a decent education, even at the primary level, as these schools face a plethora of problems that act as barriers to effective learning.
Most of these schools do not have a properly functioning set of staff as the teachers often do not show up to take the class. The effect of this is that the students that these schools produce have received an education that does not even remotely prepare them for high school. These factors and other economic constraints make the child’s parents remove them from the school and make them work to increase the income of the family. I was a privileged bystander who has always wanted to help but has never known the right way to access the means to help this situation.
When I joined Dream School Foundation as a volunteer hoping to help in some way at least, I was introduced to the “Headstart” programme. The fact that the programme helps these government institutions by employing and implementing comprehensive measures that help curb the negative effects of all the aforementioned problems. It also helps me find solace in knowing that the organisation I am helping is playing an active role in making these dilapidated schools, environments that are much more conducive to learning. Given below is the link to the Dream School Foundation page that talks about the Headstart programme in detail.

Every good story has a beginning, middle and an end, but not necessarily in that order. The beginning of my story with Dream School Foundation was in last January when my friend and college-mate Karun Gopinath invited me over to sit in his classes at his Rahmat Nagar centre. I was immediately hooked by the enthusiasm and drive of his students.  Someday I want to teach them, I had told myself back then.

Last week, I asked Karun for an opportunity to take a class for his students and he suggested that I teach students of Grade 9 ‘The Mechanics of the English Essay’. Today, I arrived at the Rehmat Nagar DSF office with a lesson plan and loads of eagerness. I was not disappointed. There is something exciting about the students who go to DSF, who never run out of a smile. I was not surprised when I was informed that there is a 40% increase in attendance since last January. More than anything else I wanted to be part the high energy learning environment at DSF.

My lesson today was on ‘The Structure of the English Essay’. Like a good story, the essay also has a beginning, middle and an end. The students learned this by studying a sample essay and observing the opening sentence of each paragraph for transitional phrases. They learned some useful strategies to organize an idea per paragraph. They actively learned how to brainstorm points by drawing a mind map for each paragraph with a central idea. They also drew their own mind maps in class and were asked to complete the essay as homework, which they will be submitting this Friday. 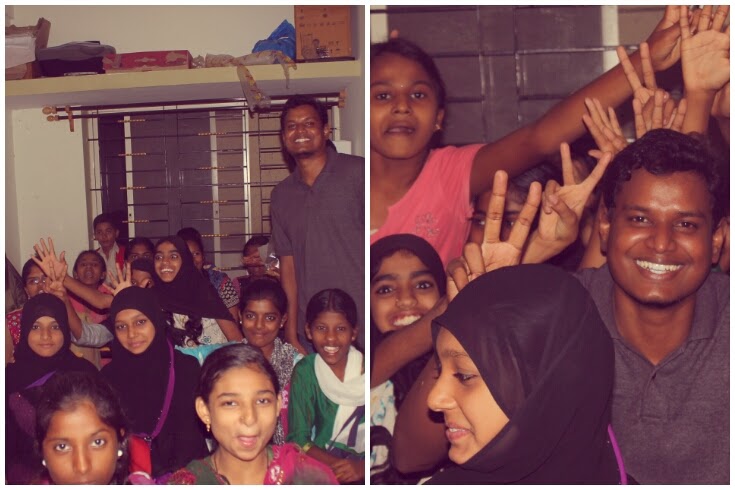 I wish to note here my sincere thanks to Dream School Foundation for this wonderful opportunity to interact with their students.

Lakshminarayan.V is an English teacher currently teaching the 11th and 12th Graders at Inventure Academy, Whitefield- affiliated to the Cambridge International Examinations.
Posted by Dream School Foundation at Sunday, August 17, 2014 No comments:

Dream School Foundation (DSF) is a registered Indian Non-Government Organization that works towards making the right to quality education and a happy childhood with overall development, a reality for every child